Jeff Chiu/Associated Press
Steve Ballmer, Microsoft’s chief executive, said he considered the new version of Office “the most ambitious” ever.

SAN FRANCISCO — For many people, Microsoft programs like Word and Excel are about as cutting edge as a shovel — tools that get the job done, but do not quicken the pulse the way an iPador an Xbox does.

Now Microsoft is seeking to reinvent Office, its venerable family of cubicle-ready applications, for a new era of computing that is increasingly being defined by flashy consumer technologies from other companies.

At a company event here on Monday, Microsoft for the first time showed the next version of Office, which it has overhauled to take advantage of touch screens, social networking and cloud computing. Steven A. Ballmer, Microsoft’s chief executive, described the product in momentous terms, saying it was “the most ambitious release of Microsoft Office that we’ve ever done.”

Although analysts agreed that Microsoft was making bold changes with the product, the company left unanswered some key questions about its plans for Office, including how much it will charge for the software and when it plans to release it in final form.

While it has overhauled Office so that users can easily operate it on touch-screen devices, Microsoft declined to say whether it intended to tailor the applications to run on the most popular tablet on the market today, Apple’s iPad. 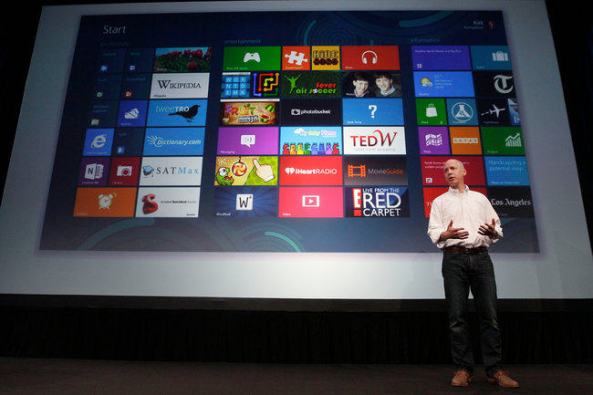 Office is one of Microsoft’s most dependable money makers, accounting for nearly 60 percent of the company’s operating profits in its last earnings report. For many business customers, applications like Word, PowerPoint, Excel and Outlook are about as indispensable as electricity.

But Office is under attack, most notably by Google, which is doing everything it can to suck the profits out of Microsoft’s cash-cow businesses. Google offers a suite of applications that run inside Web browsers, and a number of users favor them for their simplicity and the way they are accessible from nearly any device, not just computers.

While Google has had some success in persuading businesses to use the corporate version of its Web-based e-mail service, businesses have been slower to jettison other Office applications over concerns about security and reliability. Sales of Office have continued to grow in recent years. Many business customers are locked into multiyear contracts that buy them upgrades to Microsoft’s software.

But the shift toward new mobile devices like tablets represents a potential threat to Office. The iPad has become an unexpected hit in the business world, and many people have begun to carry the devices around for work purposes, though often not as a full replacement for a traditional computer. Apple is by far the biggest player in the tablet market with an estimated 60 to 70 percent share.

Microsoft has also redesigned its Windows operating system so it will run on touch-screen devices. The new version of the software, Windows 8, is expected to begin shipping on tablets starting in the fall. Office will run on tablets and more traditional computers that run Windows 8 and a related version called Windows RT.

Sarah Rotman Epps, an analyst at Forrester Research, said she was impressed with the new Office, but she wondered whether Microsoft was “leaving a gap” for competitors to fill with versions that run on various devices, including the iPad. “It’s the best version of Office yet, but that doesn’t make it invulnerable to competition and disruption,” she said.

Microsoft, in fact, has an internal effort to develop a version of Office for the iPad, though it is not clear when it plans to releases the software, several people with knowledge of the project have said. They declined to be named discussing Microsoft’s confidential plans. Microsoft will not confirm the effort.

It seems unlikely, though, that Microsoft would release an iPad version of Office until well after it releases Windows 8, since the software could create a potential advantage for Apple among business users who want touch-screen versions of Word, Excel and other applications. Microsoft does offer iPad versions of a couple of Office applications, including OneNote, a note-taking program.

On Monday, Microsoft said the new version of Office would automatically upload Office files to a Microsoft storage service called SkyDrive. This is meant to allow users to more easily switch between devices while working on their Office files. The company posted preview versions of the new Office on its Web site.

Microsoft said it had also integrated the corporate social networking service Yammer into the new Office. Microsoft in June agreed to acquire Yammer for $1.2 billion to better compete with Salesforce.com and other companies that are supplying social networking tools for businesses.