A supercomputer is a computer that is at the frontline of current processing capacity, particularly speed of calculation.

Supercomputers are used for highly calculation-intensive tasks such as problems including quantum physics, weather forecasting, climate research, molecular modeling (computing the structures and properties of chemical compounds, biological macromolecules, polymers, and crystals), and physical simulations (such as simulation of airplanes in wind tunnels, simulation of the detonation of nuclear weapons, and research into nuclear fusion).

Supercomputers were introduced in the 1960s and were designed primarily by Seymour Cray at Control Data Corporation (CDC), which led the market into the 1970s until Cray left to form his own company, Cray Research. He then took over the supercomputer market with his new designs, holding the top spot in supercomputing for five years (1985–1990). In the 1980s a large number of smaller competitors entered the market, in parallel to the creation of the minicomputer market a decade earlier, but many of these disappeared in the mid-1990s “supercomputer market crash”.

Today, supercomputers are typically one-of-a-kind custom designs produced by traditional companies such as Cray, IBM and Hewlett-Packard, who had purchased many of the 1980s companies to gain their experience. Currently, Japan’s K computer, built by Fujitsu in Kobe, Japan is the fastest in the world.[2] It is three times faster than previous one to hold that title, the Tianhe-1A supercomputer located in China.

The term supercomputer itself is rather fluid, and the speed of today’s supercomputers tends to become typical of tomorrow’s ordinary computers. CDC’s early machines were simply very fast scalar processors, some ten times the speed of the fastest machines offered by other companies. In the 1970s most supercomputers were dedicated to running a vector processor, and many of the newer players developed their own such processors at a lower price to enter t 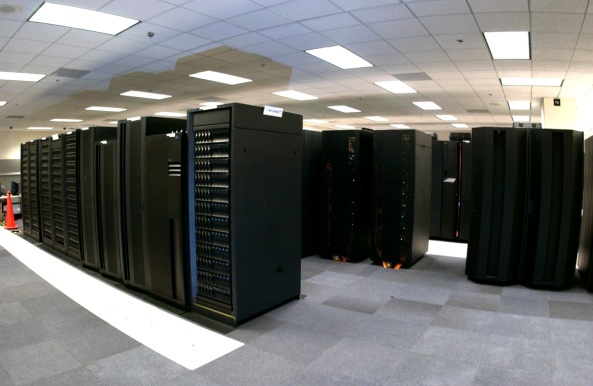 he market. The early and mid-1980s saw machines with a modest number of vector processors working in parallel to become the standard. Typical numbers of processors were in the range of four to sixteen. In the later 1980s and 1990s, attention turned from vector processors to massive parallel processing systems with thousands of “ordinary” CPUs, some being off the shelf units and others being custom designs. Today, parallel designs are based on “off the shelf” server-class microprocessors, such as the PowerPC, Opteron, or Xeon, and coprocessors like NVIDIA Tesla GPGPUs, AMD GPUs, IBM Cell, FPGAs. Most[which?] modern supercomputers are now highly-tuned computer clusters using commodity processors combined with custom interconnects.