The central processing unit (CPU) is the portion of a computer system that carries out the instructions of a computer program, to perform the basic arithmetical, logical, and input/output operations of the system. The CPU plays a role somewhat analogous to the brain in the computer. The term has been in use in the computer industry at least since the early 1960s. The form, design and 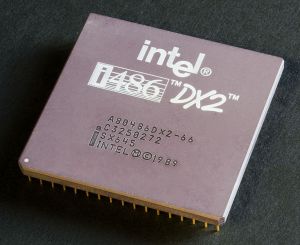 implementation of CPUs have changed dramatically since the earliest examples, but their fundamental operation remains much the same.

On large machines, CPUs require one or more printed circuit boards. On personal computers and small workstations, the CPU is housed in a single chip called a microprocessor. Since the 1970s the microprocessor class of CPUs has almost completely overtaken all other CPU implementations. Modern CPUs are large scale integrated circuits in small, rectangular packages, with multiple connecting pins.

Two typical components of a CPU are the arithmetic logic unit (ALU), which performs arithmetic and logical operations, and the control unit (CU), which extracts instructions from memory and decodes and executes them, calling on the ALU when necessary.

Not all computational systems rely on a central processing unit. An array processor or vector processor has multiple parallel computing elements, with no one unit considered the “center”. In the distributed computing model, problems are solved by a distributed interconnected set of processors